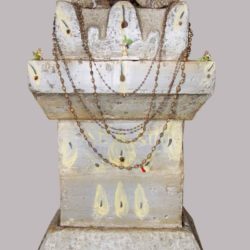 Shri Ramachandra Teertha was a great exponent of Dwaitha Vedanta. He spent a long time in Shrirangapatnam and surrounding areas propagating the Madhva Philosophy.

Once he fell seriously ill and ordained one of his disciples Kambhaluri Narasimhacharya to sanyasa with a view of installing him to the pontifical seat before he passed away. He was named Shri Vibhudendra Teertha. However, Shri Ramachandra Teertha got well and had postponed the anointment. He gave Shri Vibhdendra Teertha some minor idols and saligramas for daily worship, but none from the pooja box of the Matha and ordered him on tour for propagation of Madhwa Philosophy with specific instructions that he would send for him at the appropriate time. However, when Shri Ramachandra Teertha was at Yaragola, he fell ill again and the time came for formally handing over the Matha. Shri Vibhudendra Teertha, who was on the tour, could not come back to yaragola in time. Shri Ramachandra Tirtha, therefore was compelled to ordain Shri Vidyanidhi Teertha as his successor. Shri Ramachandra Tirtha did not want to deprive Shri Vibhudendra Tirtha from the pontification of the Uttaradi Matha. He therefore asked Dharmanna and other villagers of Yaragola to intern the pooja box after his Nirvana in a deep pit, with clear instructions that if Shri Vibhudendra Tirtha came within six months of his passing away, he would take it out and succeed him. If however he did not turn up within the specified time, the pooja box should be handed over to Shri Vidyanidhi Tirtha, who would be the next Peethadhipati and rightful successor to the seat of Uttaradi Matha.

Shri Vibhudendra Tirtha being the senior saint first offered the prayers for three days. Nothing happened. On the fourth day it was the turn of Shri Vidyanidhi Tirtha. He prayed to God by chanting the portion of fifth skandha of Bhagavata Purana. After a few minutes suddenly the soil where the pooja box was kept sundered and came up a few inches above the surface of the ground. Then the villagers of the Yaragola asked Shri Vidyanidhi Tirtha to take over the pooja box and the samsthana of the Uttaradi Matha. Thus Sri Matha was presided by the Shri Vidyanidhi Tirtha, the rightful successor of Shri Ramachandra Tirtha.

Yaragol comes under Gulbarga District. It is neary about 65 K.ms from Gulbarga and 20 kms from Yadagir.